Board President brings smiles to seniors who need them most 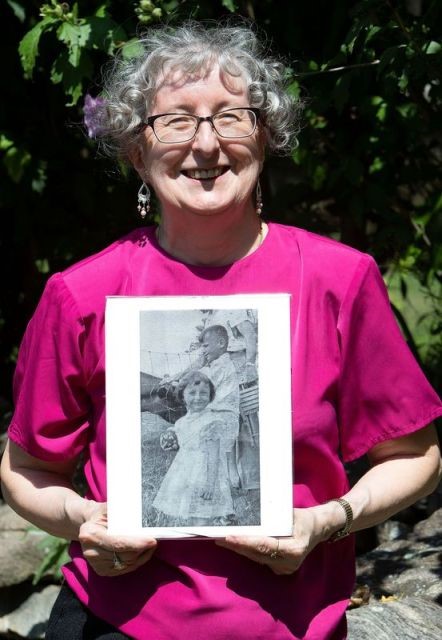 Edith ‘Edie’ Kalin holds a photo of herself when she was younger at her Waterbury home. Kalin, the current president of the Rebekahs Assembly of Connecticut, regularly visits patients in a Groton nursing home that was founded by the group in 1892. Steven Valenti Republican-American

WATERBURY — Edith Kalin’s parents would bring her as a child on their visits to the elderly residents at the Fairview Retirement Home. But for little “Edie,” it was all about seeing the cows at its farm.

Kalin is 68 now, and – prior to the COVID-19 pandemic – made the long drive to the Groton nursing home at least twice a month for decades.

“It’s something more intrinsic; it makes you feel very happy inside that you can bring a smile to someone’s face and you listen to them,” she said. “Unfortunately, some of them do not get many visitors. I do try to visit with a few when I go down there.”

Visiting the sick is one of the principles of Rebekahs, which is an “international service-oriented organization and a branch of the Independent Order of Odd Fellows,” according to its website. It was initially designed as the women’s auxiliary of the International Order of Odd Fellows, which founded Fairview in Groton in 1892, after considering a location in Waterbury.

Edith ‘Edie’ Kalin holds a photo of herself when she was younger at her Waterbury home. Kalin, the current president of the Rebekahs Assembly of Connecticut, regularly visits patients in a Groton nursing home that was founded by the group in 1892. Steven Valenti Republican-American

The organization started Fairview as a home for its members. Today, the general public can reside there.

The cows Kalin was so fond of visiting as a child were part of a larger farming operation that supported the facility’s budget – and its residents’ sense of well-being.

“Many of the residents planted their own vegetable gardens. Some of the residents would volunteer gathering the vegetables and assisting in preparing the meals, setting the tables, washing the dishes or even working in the garden,” Kalin said. “This also gave them a purpose for getting up in the day.”

The farm was closed in the 1960s when it was no longer profitable, she said.

But the facility itself has expanded to several different properties offering a variety of living arrangements, including hospice care.

Visiting the residents there over the years led to deeper involvement with Fairview. Kalin is currently president of its Board of Directors.

“My parents instilled in me the principle of visiting,” Kalin said from her Waterbury home. “I could see from going down and visiting with the residents that someone came to see them, and they were very happy to have visitors.”

Billy Nelson, executive director of Fairview, said Kalin’s Waterbury roots are evident in her commitment to visiting the elderly there.

“Having been born and raised in Waterbury myself, one thing that I developed was a strong sense of community,” Nelson said. “I can see in Edie’s dedication to our senior living community here in Groton that she brings a level of dedication and commitment to those who are less fortunate.”

He noted Kalin’s drive between Waterbury and Groton is longer than an hour each way.

“She’s an extremely generous, kind and caring individual, and I think appreciates the diversity of our senior living campus,” he said. “I think that’s also something when you grow up in Waterbury, you come to appreciate – diversity. It’s reflected in the different neighborhoods and different areas of town and in the school system, the community clubs, etc.”

The pandemic has limited Kalin’s ability to visit the senior population, as have the frequent hospitalizations of her ill husband, whom she met as a young woman at an Odd Fellows youth group event.

“I do miss not going, I’ll tell you,” she said. “When I feel the time is right, I would not mind living down there.”

Book A Tour Of Fairview

Whether you are looking for short-term care or a new, independent lifestyle, we invite you to come see what makes Fairview’s facilities special.

Give us a call or fill in the form below and we'll contact you. We typically answer all inquiries within 24 hours on business days.
(860) 445-7478
info@fairviewct.org